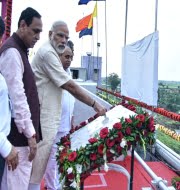 Background
Saruashtra region of Gujarat comprises 11 districts. These districts faces drought like situation often and has been reeling under severe water scarcity due to scanty rainfall. The SAUNI Yojana was announced in 2012 when PM Modi was the Chief Minister of Gujarat.