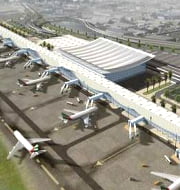 Jharsuguda is the second airport of Odisha after Bhubaneswar to become operational. It has been developed by Airports Authority of India (AAI) in collaboration with Odisha Government. The airport is spread across over 1027.5 acres of land. Area of its terminal Building is around 4000 sqm.
The airport has 2390 metre-long runway and has been developed for all weather operations including night operations for A-320 type of aircraft. It is equipped with state-of-the-art passenger facilities. Interiors of its building depict local handicrafts, artwork and tourist destinations of state highlighting rich ethos and culture of region. The airport will play significant role in development of Western Odisha and will give impetus to the growing tourism industry in the region.