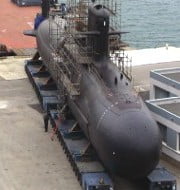 Anil Ambani-led Reliance Group’s Pipavav Defence and Offshore Engineering (PDOE) inked a multi-crore agreement with Russian firm Zvyozdochka, JSC Ship Repairing Centre.
The agreement was signed in lines with Make in India initiative for the Medium Refits and Life Certification of 877 EKM Submarines in India. With this, Reliance Group became the first private sector Indian company to refit of submarines in India.
Both entities will execute the programme under a joint venture (JV) company with an indicative value of 11,000 crore rupees in which PDOE will have 51 per cent stake.
As per the agreement, Zvyozdochka will provide complete technical support and assistance to the JV Company. It will also provide the enhancement of infrastructure at the PDOE facilities in Gujarat and training of engineers.
Apart from India, the JV Company will undertake similar work for large submarine forces of similar class deployed by countries such as Vietnam, Algeria and Iran.
It should be noted that Zvyozdochka is the premier ship repairing centre in Russia and has undertaken upgradation and refurbishment of more than 90 warships and 120 submarines.