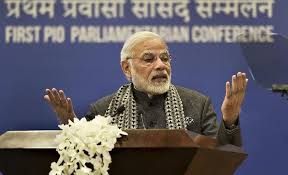 The first-ever Persons of Indian Origin (PIO) Parliamentary Conference was held in the Pravasi Bharatiya Kendra (PBK) in New Delhi on the occasion of Pravasi Bhartiya Diwas (PBD). It was inaugurated by Prime Minister Narendra Modi. The conference was way of reaching out to Indian community overseas by Central government.

The PIO Parliamentary Conference was organised by Ministry of External Affairs to forge stronger ties with PIO. 124 Members of Parliament (MP) and 17 mayors from 23 countries including UK, USA, South Africa, Canada, Fiji, Kenya, Mauritius, New Zealand, Sri Lanka among others participated in this conference.
The biggest delegation was frim Guyana with 20 members of parliament and three mayors. The US delegation will be represented by only two mayors as the Senate is in session
The event had two Thematic Plenary Sessions – ‘PIO Parliamentarians: A Journey from Struggle to Parliament’ and ‘Resurgent India: Role of PIO Parliamentarians’.

A person is deemed to be Indian origin if he/she is foreign citizen (other than of Pakistan or Bangladesh) and had held an Indian passport any time. He may be either person whose parents or grandparents were citizens of India by virtue of the Constitution of India or the Citizenship Act, 1955. He may be also person who is spouse of an Indian citizen or of PIO (other than of Pakistan or Bangladesh).