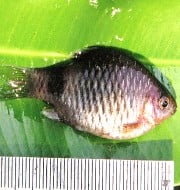 A new species of fish called Pethia striata was discovered by ecologists in Tunga River in the Kudremukh National Park, Karnataka.
This finding was published in the journal- American Society of Ichthyologists and Herpetologists by researchers from Ashoka Trust for Research in Ecology and the Environment (ATREE).
Key characteristics of Pethia striata