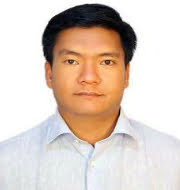 Pema Khandu (36) of Congress Party was sworn in as the 10th Chief Minister of Arunachal Pradesh. With this,he became the youngest Chief Minister in the country.
He was administered the oath to office and secrecy by Governor Tathagata Roy at the Rajbhavan in Itanagar. Besides, Chowna Mein was sworn in as the Deputy Chief Minister.
Pema Khandu was selected as CM of Arunachal Pradesh after he had staked claim to power on the basis of the support of 45 party MLAs along with 2 independents in the 60-member House with an effective strength of 58. Now he has to prove his majority in the floor test.
He is also supported by the ousted Chief Minister Khaliko Pul, who has returned to the Congress party with 30 dissident Congress MLAs.