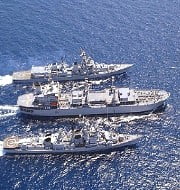 The Pakistan Navy has kicked of its biannually-held multinational AMAN 2017 naval exercise in Karachi, Pakistan. 37 countries are participating in the international event.
Aman-17 is the sixth edition such exercise which Pakistan has been holding biannually since 2007. Previous exercises were held in 2007, 2009, 2011, and 2013, and 2016 respectively.