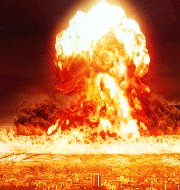 According to recent report, Pakistan could become world’s 5th largest nuclear weapons state after Russia, United States, France and China in terms of possession of total nuclear warheads. Pakistan currently has 140 to 150 nuclear warheads and its stockpile is expected to increase to 220 to 250 by 2025 (surpassing United Kingdom) if its current proliferation trend continues.

The current estimate of 140 to 150 nuclear weapons with Pakistan exceeds projection made by US Defense Intelligence Agency in 1999 that Pakistan would have 60 to 80 warheads by 2020. Pakistan is continuing to expand its nuclear arsenal with more warheads, delivery systems and growing fissile materials production industry.
The size of increase in Pakistan’s nuclear arsenal will depend on many factors. Two key factors will be how many nuclear-capable launchers Pakistan plans to deploy, and how much Indian nuclear arsenal grows. Pakistan is developing several nuclear weapons delivery systems, four plutonium production reactor, and its uranium enrichment facilities are further expanding.
Pakistan is also modifying its nuclear posture with new short-range nuclear-capable weapon systems to counter military threats below the strategic level. Its nuclear program seeks to create full-spectrum deterrent that is designed not only to respond to nuclear attacks, but also to counter an Indian conventional incursion onto Pakistani territory.