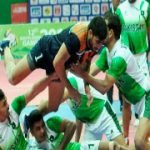 Pakistan has won the third edition of the Asian Kabaddi Championship 2016 (Circle Style) by defeating India.
In the final match held at Pakistan Ordinance Factory Sports Complex in Wah Cantonment, Pakistan (defending champion) defeated India by 50-31 points.
This is Pakistan’s second successive win in the Asian Kabaddi title as they had won it in 2012.
The championship was organised by the Pakistan Kabaddi Federation (PKF) in collaboration with POF Sports Control Board under the banner of the Asian Kabaddi Federation.
This edition of championship took place in a league format and seven teams including India, Iran, Turkmenistan, Afghanistan, Nepal, Sri Lanka and Pakistan had participated.  It should be noted that Pakistan has hosted the Asia Circle Style Kabaddi Cup for the second time. Earlier it was held in 2012.