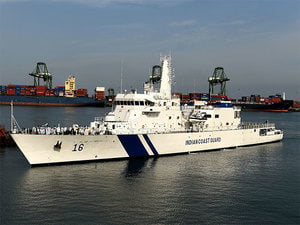 Larsen and Toubro (L&T) handed over offshore patrol vessel (OPV) named “Vikram” to the Indian Coast Guard. It is country’s first-ever such defence vessel to be built in a private shipyard
The vessel was indigenously developed in-house at L&T’s Kattupalli shipyard. Its entire design and construction processes have undergone dual certification from American Bureau of Shipping and Indian Registrar of Shipping.
OPV Vikram is first of seven vessels for which by Ministry of Defence had awarded Rs. 1,432-crore contract to L&T in March 2015. It will be inducted into service by April 2018 after completion of extensive trials of equipment and machineries.

The OPV Vikram is 97 metres long, 15 metre wide and has 2,140 tonne displacement capacity with  range of 5,000 nautical miles and can reach speed of up to 26 knots (One knot is 1.852 km/hr). It is equipped with state-of-the-art radars, navigation and communication systems capable of operating in tropical conditions. About 60% components of the ship were sourced from domestic suppliers.
The ship is fitted with one 30 mm automatic gun with Fire Control System (FCS) and two 12.7 mm gun with FCS. It has integral twin-engine helicopter and backend helipad, which enhances its operational, surveillance, search and rescue capabilities. It will be deployed for day and night surveillance patrol, search and rescue and in pollution response operations in exclusive economic zones (EEZ) of the country.