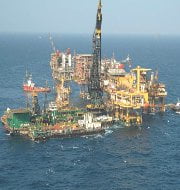 State-owned Oil and Natural Gas Corporation (ONGC) has bought a 15 per cent stake in Russia’s second-largest oil field Vankor from Rosneft for about 1.35 billion US dollars.
In this regard, ONGC Videsh Ltd (OVL) the overseas investment arm of ONGC has signed agreements to buy 15 per cent stake in the Vankor oil field located in East Siberia.
The agreement to buy stake in Vankor was signed by the OVL Managing Director Narendra Verma and Chairman of Rosneft Management Board Igor Sechin in Vladivostok.
Under the terms of the agreement

Presently, Rosneft (Russian national oil company) holds 100 per cent stake in Vankor which started production in 2009. With this stake acquisition Rosneft, stake will come down to 85 per cent.
The stake acquisition is subject to relevant board, Russian government and Regulatory approvals and is expected to be completed by mid-2016.
This is fourth biggest acquisition by OVL. It already has a