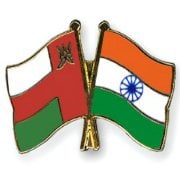 Oman recently announced to establish Friendship association with India. This will the first of such initiative in West Asia. It was announced during a bilateral discussion held between the foreign ministers of the country. The bilateral discussion was held virtually on the backdrop of recent trip by the External Affairs Minister of India Shri S Jaishankar to Bahrain and UAE. During the bilateral discussion, the countries reviewed their economic cooperation, consular issue, capacity building and training programmes.

The association will aim to provide a platform to promote matters of mutual interest, understanding between the business and social communities of the countries.

In 2018, Indian PM Modi visited Oman and enhanced the cooperation between the countries in defence, energy, food security, trade and investment and regional issues.

In December 2019, India and Oman signed the Maritime Transport Agreement. The pact was first of its kind that India signed with a Gulf country. The pact enabled India to expand its footprints in Southern Indian Ocean, Western Indian Ocean, East Africa and Persian Gulf. This was a part of India’s Indo-Pacific Vision. The Indian Navy has been provided access to the Duqm Port. The Duqm port if the largest sea port located in the Indian Ocean. India is planning several projects in Oman. This includes a 1.2 billion project to set up the largest Sebacic Acid plant (which is the largest in Middle-East). Also, an integrated tourism complex called “Little India” is to be constructed under 78 million USD.

Oman is an ideal place for international business as it has industrial hubs established all along the 1,700 kilo metres of sea coast on the Indian Ocean. The country holds four industrial free zones and four sea ports facing the Indian Ocean. The Industrial Free Zones of Oman offer 30 years of corporate tax exemption, no restrictions on repatriation of profits, no income tax, usufruct agreements, 50 years of renewability, currency exchange freedom and stable currency rate.