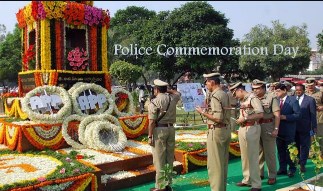 Police Commemoration Day (Police Martyr’s Day) is observed every year on 21 October in memory of the policemen killed at Hot Springs in North Eastern Ladakh by Chinese troops on this date in 1959.

On Police Commemoration Day 2019, Prime Minister Narendra Modi saluted police forces and their families and urged people to visit National Police Museum. PM Modi inaugurated this refurbished and renovated memorial and museum on 21 October 2018. The underground museum is first police museum of its kind in India, and showcases over 2000 years of policing in region, since the time of Kautilya’s system of law and order in 310 BCE.

Till October to November of 1959, Indian Police personnel were responsible for defending 2,500 mile long border of India with then Tibet. On 21 October 1959, 20 Indian Police personnel were attacked by Chinese troops in Ladakh. This altercation between troops led to the death of 10 policemen and 7 others sustained injuries. These 7 injured were taken prisoners by Chinese while remaining managed to escape. On 28 November 1959, the Chinese troops handed over the dead bodies of martyred policemen to India. Their cremation was held with full Police honours at Hot Springs in North Eastern Ladakh. Ever since this incident, the 21 October is celebrated every year as Police Commemoration Day in remembrance of martyrs.