October 17: The International Day for the Eradication of Poverty 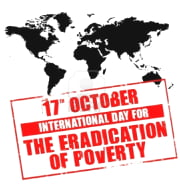 The International Day for the Eradication of Poverty (IDEP) is observed every year on October 17 to raise people’s awareness of the need to eradicate poverty and destitution worldwide, particularly in developing countries.
The 2017 theme ‘Answering the Call of October 17 to end poverty: A path toward peaceful and inclusive societies’. It seeks to remind importance of the values of dignity, solidarity and voice underscored in the Call to Action to fight to end poverty everywhere.
This year’s celebration also marks 25th anniversary of declaration of IDEP by UN General Assembly (UNDP). It also marks 30th anniversary of “Call to Action” by Father Joseph Wresinski which had inspired observance of October 17 as World Day for Overcoming Extreme Poverty and recognition by UN day as the IDEP

The International Day for the Eradication of Poverty (IDEP) was instituted by UNGA by adopting a resolution on 22 December 1992 to promote awareness among people to eradicate poverty and destitution around the world particularly in developing countries. It was observed for the first time in 1993.