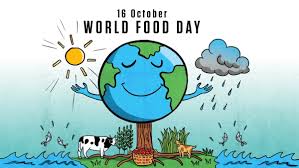 The World Food Day is celebrated by the United Nations Food and Agriculture Organization on October 16 every year. It is concerned with hunger, food security. The celebrations include International Fund for Agricultural Development and World Food Programme.

The World Food Day also marks the 75th anniversary of the Food and Agriculture Organization. At first, the day was celebrated to commemorate the establishment of FAO. Later it turned into an event creating awareness on food shortage and reviving food systems all over the world.

This year, the World Food Day is celebrated under the theme

Theme: Grow, Nourish, Sustain. Together. Our Actions are our Future

This year, in 2020, the World Food Programme received the Nobel Prize in Peace, 2020 for combating hunger and contributing towards peace in conflict zones.

The COVID-19 has worsened the hunger in India. India is the largest food producer in the world. It is also home to one-third of world malnourished children. India ranks 102 in Global Hunger Index among 117 countries.

India had plans to increase its agricultural exports to 100 billion USD targeting Latin American and Oceania. This was to be achieved by 2025 and the goal was set before COVID-19. COVID-19 fragmented the fragile food system in the country and disrupted its supply chain greatly.

According to Food and Agricultural Organization, 40% of the food produced in India are wasted. This is mainly due to lack of storage facilities. Around 20% of the food in India is lost before even they reach the markets.

In 2020, to make things worse, rice cultivation came under big threat due to locust invasion. Apart from India, other major food producing countries such as Pakistan, East Africa were also affected.

In India, majority of the population are farm labourers. Also, 90% of Indian labour work force work under informal sector. The pandemic restricted their movement. This increased food insecurity in the country and nutrition security worsened. Today, more than 38,000 relief camps are providing basic meals to around 16 million people every day.