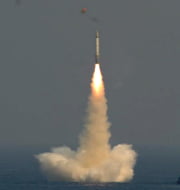 Nuclear capable submarine-launched ballistic missile (SLMB) code named K-4, was successfully test fired from an undisclosed location in the Bay of Bengal.
Test: It was conducted by the Strategic Forces Command (SFC) along with Defence Research and Development Organisation (DRDO) which provided all logistics.
The missile was fired from 20-meter deep from onboard silos of the Ship Submersible Ballistic, Nuclear (SSBN) submarine. During the test it successfully hit with high accuracy after covering more than 700 km distance.