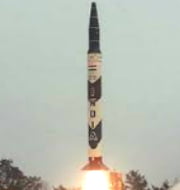 Indigenously developed nuclear capable surface-to-surface ballistic missile Agni-I was successfully test-fired from Dr Abdul Kalam Wheeler Island off the Odisha coast.
The user trial of the strategic missile was carried out by the Strategic Forces Command (SFC) of Indian Army.

About Agni I Missile

The Agni I missile already has been inducted into armed forces and claimed to be a part of the India’s minimum credible deterrence under No first to use policy.