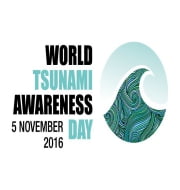 The First World Tsunami Awareness Day was observed across the world on 5 November 2016 to spread awareness among people across the world about Tsunami.
The United Nations General Assembly (UNGA) had constituted the day by adopting a resolution in December 2015. The proposal was first mooted by Japan after the 3rd UN Conference on Disaster Risk Reduction held in Sendai (Japan) in March 2015.
2016 Theme: “Effective Education and Evacuation Drills”.
Significance of the Day

Background
November 5 was designated as World Tsunami Awareness Day by UNGA to coincide with the annual anniversary of the 1854 Inamura-no-hi (Fire of Inamura) event. On this day in 1854, a villager in Wakayama Prefecture in Japan through his quick action had saved countless lives after he had set fire to sheaves of rice on the top of a hill, thus warning people of the imminent danger of a tsunami. This was the first documented instance of a tsunami early warning.