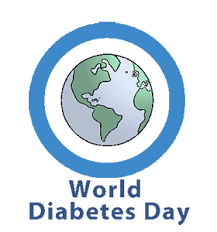 The World Diabetes Day was launched in 1991 by the World Health Organization and the International Diabetes Federation.

China is home to second largest diabetes patients in the world. Around 77 million in India suffer from diabetes. China leads the list with 116 million diabetic patients.

India contributes to 15% of global diabetes burden and only 1% to global diabetic research according to National Health Mission. Lately Diabetic retinopathy has increased in India

It is the damage of blood vessels in eye due to high blood sugar levels. Eventually, the retina gets damaged. In 2019, India released National Diabetes and Diabetic Survey. According to the survey, on in 46 diabetic patients in India become visually impaired due to diabetes.

Why on November 14th?

The World Diabetes Day is celebrated on November 14 because, it marks the birthday of Sir Frederick Banting. He discovered Insulin.

The WHO Global Diabetes Compact was launched in April 2021. The main goal of the initiative is to support the countries in implementing programmes that help prevent diabetes and manage diabetes. Around 6% of world population is suffering from diabetes. This is four times the number as compared to that of 1980. The number is expected to increase to 570 million in 2030.