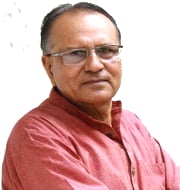 Noted Hindi writer and journalist Ravindra Kalia passed away in New Delhi after suffering from liver cirrhosis. He was 78.
He was known for his works like Ghalib Chutti Sharab and Nau Saal Chotti Patni. He had served as Director of Bharatiya Jnanpith.