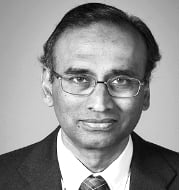 Nobel Laureate Sir Venkatraman Ramakrishnan has been confirmed as President Elect of the Royal Society.
His appointment was confirmed by the society’s council met on 19 March 2015 and will assume the charge on 1 December 2015.
He will succeed eminent geneticist Sir Paul Nurse who had taken on the role in 2010 and will step down after the customary 5-year term.

The position President of the Royal Society is most important in British science and existed since 1660. The President of society is a key advocate for science in the UK and the world.