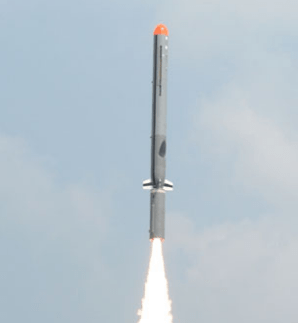 Defence Research and Development Organisation (DRDO) successfully conducted flight test of its indigenously designed and developed long range sub-sonic cruise missile ‘Nirbhay’ from test range at Chandipur, Odisha.
It was the fifth experimental test of Nirbhay missile system. It achieved all mission objectives completely from lift-off till the final splash, boosting the confidence of all scientists associated with the trial.

It is India’s first indigenously designed and developed Long Range Sub-Sonic Cruise Missile. It has blended missile and aeronautical technologies which allows it to take off vertically like missile and cruise horizontally like an aircraft.
It is two stage missile powered by solid rocket motor booster developed by Advanced Systems Laboratory (ASL) It has operational range of 1000 km and can carry warheads of up to 300 kg including nuclear warheads. It can be launched from various kind of platforms.
It has capability to loiter and cruise at 0.7 Mach, at altitudes as low as 100m. It is terrain hugging missile which keeps on encircling the area of its target for several minutes and then hits bull’s eye’ on an opportune time. It is difficult to detect by enemy’s radars. It is capable to engage several targets in a single flight.
The guidance, control and navigation system of missile is configured around indigenously designed Ring Laser Gyroscope (RLG) and MEMS based Inertial Navigation System (INS) along with GPS system.