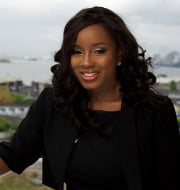 Nigerian journalist and presenter Didi Akinyelure has won the second BBC World News Komla Dumor Award.
As part of the award, she will start a three-month placement at the BBC in London in September 2016. It will provide her opportunity to gain skills and experience by attending a course with BBC Academy.
Presently, Didi Akinyelure is a prime-time news anchor in Nigeria and presents business news for CNBC, which broadcasts across the African continent.
She had started her career in the financial sector before moving to journalism in 2011. She has covered several stories social entrepreneurs in Africa who are transforming the African business landscape.

The award was established in the honour Ghanaian journalist Komla Dumor. He was a presenter for BBC World News who had died suddenly aged 41 in 2014. The first Komla Dumor Award was won by Ugandan news anchor Nancy Kacungira.