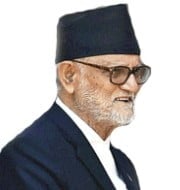 Nepal Prime Minister Sushil Koirala has resigned from office by submitting his resignation to President Ram Baran Yadav.
He has resigned to give way to Parliament to elect new Prime Minister and government as per country’s new Constitution which was adopted on September 20, 2015.
President Ram Baran Yadav has accepted the resignation and asked Mr. Koirala to conduct daily administrative functions till a new government is formed.
In the election to elect new Prime Minister, Sushil Koirala has filed his candidacy from his Nepali Congress (NC) party. He will be running against Communist Party of Nepal (Unified Marxist–Leninist) CPN-UML Chairman K P Sharma Oli.