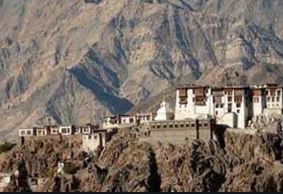 The National Commission for Scheduled Tribes (NCST) has written to Union Ministry of Home Affairs and Union Ministry of Tribal Affairs Minister recommending that Ladakh be declared a tribal area under the Sixth Schedule of the Constitution.

Why the Tribal Area Status has been Recommended?

Since Article 370 provided a special status to the erstwhile state of Jammu and Kashmir, the provisions of Fifth and Sixth schedule were not applicable to the state.

With the withdrawal of the special status, now there is no bar on declaring the areas in the Union Territories of Jammu and Kashmir or Ladakh as Scheduled Areas (Fifth Schedule) or Tribal Areas (Sixth Schedule).

As per the census of 2011, about 80% of the population in Leh and Kargil districts belong to Scheduled Tribes. The tribes inhabiting the region are Balti, Beda, Boto, Brokpa, Drokpa, Changpa, Garra, Mon and Purigpa.

The region of Ladakh has the predominantly tribal population and the NCST is of the view that the tribal area status will help in democratic devolution of powers, preserving and promoting a distinct culture of the region, protect agrarian rights including rights on land and enhance the transfer of funds for speedy development of the region.

The Constitution of India under the sixth schedule and Article 244 makes special provisions for the administration of the tribal-dominated areas in four states viz. Assam, Meghalaya, Tripura and Mizoram.

First of its Kind

The Ministry of Home Affairs is the central authority for declaring an area as a “tribal area”. If the Union Territory of Ladakh is granted the tribal area status it will become the first union territory in the country to be declared as a tribal area.