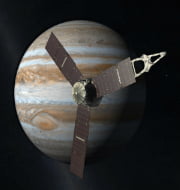 NASA’s Juno spacecraft has discovered Earth-sized cyclones at the poles of the Jupiter. It has also unveiled the presence of the storm systems that travel deep into the heart of the planet. Both the poles of the Jupiter were found to be covered with Earth-sized swirling storms which are densely clustered and rubbing together. The findings were the result of the Juno probe’s first data-collection pass on August last year. The spacecraft flew for about 4,200 kilometres of Jupiter’s swirling cloud top. The findings suggest the presence of ammonia clouds over the planet which are quite variable and continue to increase up to a few hundred miles or kilometres.
Measurements of Jupiter’s magnetosphere indicate that Jupiter has a stronger magnetic field than expected which is more irregular in shape. The magnetic field in the planet is in the order of 7.766 Gauss which is about 10 times stronger than the strongest magnetic field found on Earth.
The next flyby of the Juno Probe has been scheduled for July 11. During the flyby, the spacecraft will fly directly over Jupiter’s Great Red Spot.

Juno was launched in August 2011 to study Jupiter’s composition and evolution. It’s the first solar powered spacecraft to orbit Jupiter. It is second spacecraft to orbit Jupiter, after Galileo probe which had orbited the planet from 1995–2003. The unmanned spacecraft had successfully entered Jupiter’s orbit in July 2016 after a five year journey and traversing distance of nearly 2 billion miles. The primary goals behind the launch of Juno is to find out whether Jupiter has a solid core, study of the formation of its atmosphere and magnetosphere, and to ascertain whether or not water is present in the gas cloud shrouding the planet. Juno has nine instruments on board to study atmosphere, gravity, magnetic field and possible existence of solid core in Jupiter. The information gathered from it will provide vital clues to how the planet has formed and evolved. The spacecraft has been named after the Roman goddess Juno, the wife of Jupiter who is considered as the god of the sky in ancient Greco-Roman mythology.