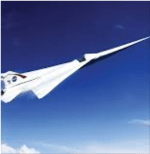 NASA has reached a major milestone in developing a quieter supersonic passenger jet that is capable of safely travelling over land.

NASA has completed the preliminary design review (PDR) of its Quiet Supersonic Transport (QueSST) aircraft design. NASA had forged a partnership with Lockheed Martin, in February 2016 for the QueSST preliminary design. With this development, NASA is a step closer to actually building an X-plane.
The project falls under the ambit of NASA’s Commercial Supersonic Technology Project.
Quiet Supersonic Transport (QueSST) aircraft design is the initial design stage of NASA’s planned Low Boom Flight Demonstration (LBFD) experimental airplane. The LBFD is also known as X-plane.
QueSST design will be capable of fulfilling the LBFD aircraft’s mission objectives. NASA will be developing  LBFD aircraft to fly at supersonic speeds which will produce a soft “thump” instead of creating the disruptive sonic boom associated with supersonic flights of the present day.
NASA has already completed testing a scale model of the QueSST design in its supersonic wind tunnel located at Glenn Research Centre in Cleveland. In the early next year, NASA will award a contract to build the piloted, single-engine X-plane.