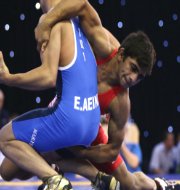 Indian Wrestler Narsingh Pancham Yadav has secured quota for India in the 2016 Olympic Games.
He qualified for Olympic Games after winning a bronze medal in the Men’s 74 kg Freestyle category at the World Wrestling Championship held at Las Vegas, United States.
In the semifinal bout, Narsingh lost the match to Unurbat Purevjav of Mongolia, thus settling to the bronze medal.
With this third-place finish, Narsingh also became the lone Indian to win a medal at the prestigious tournament as well as book a berth for the 2016 Rio Games.
This is also the the first time that an Indian wrestler has earned an Olympic berth by winning medal at the World Championship.