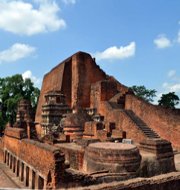 The ruins of ancient Nalanda Mahavihara (also known as old Nalanda University) of Bihar has been included in the List of UNESCO’s World Heritage Site.
Nalanda Mahavihara ruins comprise the archaeological remains of monastic-cum-scholastic from the 5th century BC to the 13th century AD.
It located near Patna, state capital of Bihar and is 26th cultural site of India to get prestigious world heritage status.
Key Facts

Note: Nalanda University is the second World Heritage site in Bihar after Bodhgaya’s Mahabodhi temple to be accorded UNESCO’s World Heritage Site tag. This status will help in conservation and protection of the site in better way and also increase funds from the UNESCO.