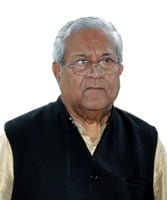 President Pranab Mukherjee has appointed Governor of Nagaland Padmanabha Balakrishna Acharya to take additional charge as the governor of Assam.
Padmanabha Balakrishna Acharya will continue to hold the additional charge till a new governor is appointed to succeed J B Patnaik, the Governor of Assam, who will be completing his tenure on December 10.
Constitutional provision of Governor
Article 153: It says that there shall be Governor for each state. But 7th Constitutional Amendment Act, 1956 facilitated the appointment of the same person as a governor for two or more states.