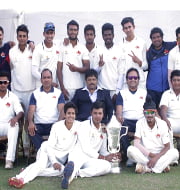 The Mumbai under-23 cricket team has won the Col CK Nayudu Trophy for the season 2015-16. With this victory, they will be awarded with a cash prize of 20 lakh rupees.
In the final match played at Holkar Stadium, Indore they defeated Madhya Pradesh under-23 cricket team.
Mumbai won this title after Madhya Pradesh scored 422 all out in second innings falling short of 155 runs to target of 577 runs set by Mumbai in the first inning.
This was Mumbai s second big title of the season after they had won the Ranji Trophy for the 41st time earlier.
Col CK Nayudu Trophy is named after country’s first Test captain Col. Cottari Kanakaiya Nayudu.