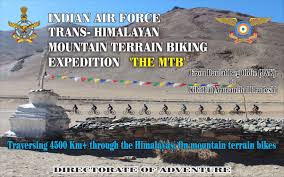 Indian Air Force (IAF) launched Trans-Himalayan Mountain Terrain Biking Expedition (THE MTB) as part of its celebration of 86th Anniversary on 8 October 2018. The expedition was started on 17 Aug 2018 from Daulat Beg Oldie (DBO) in Ladakh for Kibithu in Arunachal Pradesh. DBO and Kibithu are two forward most outposts of India in North and in East with DBO being highest airfield in the world located altitude of 16614 feet.

The aim of MTB expedition is to promote spirit of adventure among Air Warriors to undertake daunting challenges and ‘Go Green’ initiative. The team for expedition consisted of 18 Air warriors (12 riders and 06 support staff) which also include two women officers. It is led by Wg Cdr S Sharathchandra.
The team covered distance of more than 4500 km through mountain terrain passing through states of Jammu & Kashmir, Himachal Pradesh, Uttarakhand, Sikkim, Assam and Arunachal Pradesh. This is for first time IAF has undertaken mountain terrain biking expedition of such magnitude. Under this adventure expedition, IAF team will undertake involves camping and living outdoors, managing and surviving on  their own in snow, rain and extreme climatic conditions throughout the expedition.