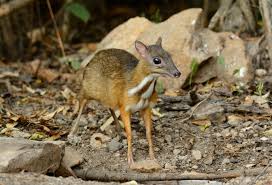 Telangana Forest Department for first time has re-introduced ‘mouse deer’ in the forests of Nallamalla in Amrabad Tiger Reserve (ATR) bred at Nehru Zoological Park, Hyderabad.
Eight mouse deer, two male and six females were released from captivity to semi-wild conditions having protected enclosure of 2.14 hectares. Now field biologists and forest staff will closely monitor their adaptability and behaviour in their natural setting, so they can be released from their enclosure into the wild.

Since 2010, Nehru Zoological Park in collaboration with Laboratory for Conservation of Endangered Species (LaCONES) of Centre for Cellular and Molecular Biology (CCMB), and Central Zoo Authority, Delhi were carrying out a breeding programme for conservation of mouse-deer. They have successfully raised total population of mouse deer to 172, which includes 76 females

Mouse deer (also known as Spotted Chevrotain) is one of the endangered species. It looks like weird mash-up of a deer, mouse and pig. It is not considered true deer, but shares suborder with deer (Ruminantia). It has its own family called Tragulidae. It is nocturnal.
Because of their small size they are smallest ungulates (large mammals) in the world. It is found in deciduous and evergreen forests throughout India. Its population is on decline due to destruction of their habitat and poaching.