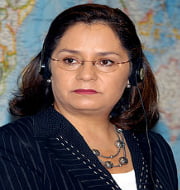 UN Secretary General Ban Ki-moon has selected Mexican diplomat Patricia Espinosa as the executive secretary of the UNFCCC (United Nations Framework Convention on Climate Change).
She will replace the incumbent Christiana Figueres when her term ends in July 2016. Prior to this selection she was serving as Mexico’s ambassador to Germany
Earlier she had served as Mexico’s representative at the UN in New York for drug traffic, human rights, women promotion, social development and children’s rights.
In her new role, she will play an important role in implementing the Paris Agreement on Climate Change that was approved by 195 countries in December 2015 during UNFCCC’s COP 21 held in Paris, France.