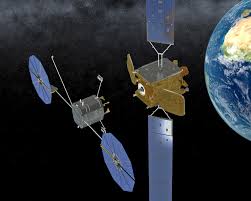 The robotic Mission Extension Vehicle-1 (MEV-1) was successfully launched atop of Russian Proton rocket from Baikonur Cosmodrome in Kazakhstan. It is first of its kind commercial satellite-servicing spacecraft. It is designed to dock with aging spacecraft more than 22,000 miles above Earth, then extend its life with aid of solar-electric thrusters. Its successful launch marks beginning of era of commercial satellite servicing in the space.

It was built by Virginia-based company Northrop Grumman. It will attempt first-ever docking between two spacecraft near geostationary orbit (nearly 36,000 kilometers over the equator that is popular with communications satellite operators). It will link up with 18-year-old Intelsat communications satellite early next year. Once docked, with this old satellite, it will take over propulsion for Intelsat 901 satellite, which is running low on fuel. It will then put Intelsat back into an ideal target orbit — thus extending its useful life by as many as five years.

MEV-1’s Life span: It is designed for 15-year useful life, and can dock and undock multiple times, thus, it will be providing well in excess of 15 years of mission extension to orbital geosynchronous satellites l running low on its own propellant supply.