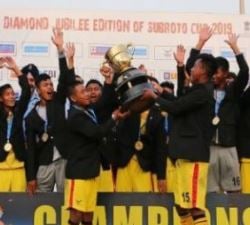 The winning team Hopewel Elias Higher Secondary School of Meghalaya took home a sum of Rs 4,00,000 and the runners-up Krida Shiksha Prothishtan of Bangladesh walked away with prize money of Rs 2,50,000.

Subroto Cup Football Tournament is one of the famous inter-school football tournament in India. The tournament is named after the Indian Air Force Air Marshal Subroto Mukerjee. It started in 1960 and has been conducted every year annually since then.