Meghalaya govt to rename Dikkibandi stadium after P A Sangma 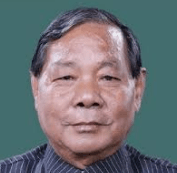 The government of Meghalaya has decided to rename the Dikkibandi stadium after P A Sangma. The decision was made by the state cabinet as per the recommendations made by state naming authority tasked with the job to name roads, and institutions after personalities. Along with the Dikkibandi stadium, a junction leading to AMPT road in Tura have been renamed after P A Sangma.

Purno Agitok Sangma has served as the Speaker of the Lok Sabha and the Chief Minister of Meghalaya. He began his political journey with the Congress party and represented the Tura constituency of Meghalaya in Lok Sabha multiple times.
P A Sangma served as the Chief Minister of Meghalaya from 1988 to 1990. He formed the Nationalist Congress Party in 1999 along with  Sharad Pawar and Tariq Anwar.
He contested the elections for the post of President of India in 2012 and lost the elections to Pranab Mukherjee. P A Sangma died from cardiac arrest in New Delhi on 4 March 2016 at the age of 68.