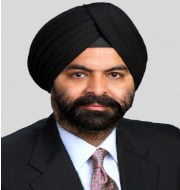 US President Barack Obama has nominated MasterCard’s Indian-American CEO Ajay Banga as a member of the Commission on Enhancing National Cybersecurity.
Mr. Banga is one of the 10 members of the Commission which also includes General Keith Alexander former Director of the top US spying body National Security Agency (NSA).
The commission was established in February 2016 to make detailed recommendations to strengthen cybersecurity in both the public and private sectors while protecting privacy, ensuring public safety and economic and national security.