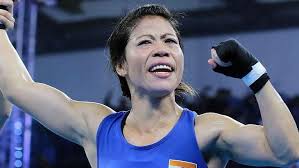 Six-time World Amateur Boxing Champion and Olympian bronze medallist (London 2012), MC Mary Kom was announced as one of the recipients of the prestigious ‘Padma Vibhushan’ award on the occasion of  Republic Day 2020. Mary Kom became the first women sportsperson to win the award. She is the first boxer in the world in both men and women categories to win eight World championship medals and also the first woman boxer to have won each of the first seven World Champion medals.

Seven eminent personalities were presented the ‘Padma Vibhushan’ award, which is the second-highest civilian award in India, only next to the ‘Bharat Ratna’ and is awarded for exceptional and distinguished service. Other awardees are Former Union Ministers Arun Jaitley, Sushma Swaraj and George Fernandes (posthumously), Singer Chhannulal Mishra of Uttar Pradesh and the former Prime Minister of Mauritius, Anerood Jugnauth.

Mary Kom spoke to media on Sunday and said that the award has inspired her to do even better as she now aims to win the Bharat Ratna award.