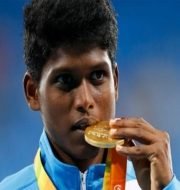 Mariyappan Thangavelu has won India’s first gold medal at the 2016 Rio Paralympics. He won the gold medal in the Men’s High Jump T-42 event with jump of 1.89 metres.
With this, Thangavelu became the first Indian high-jumper to win gold at the Paralympics. This was India’s overall third gold at the Paralympics and the first after 12 years.
In addition, India’s Varun Singh Bhati won the bronze medal in same event with the jump of 1.86 metres to finish third. Sam Grewe of United States won the silver medal.
India had won its first ever Paralympics Gold medal in the 1972 Heidelberg Games. It was won by Swimmer Murlikant Petkar.
Besides, India had claimed Gold and Bronze medals at 2004 Athens Paralympics. The Gold medal was won by Javelin thrower Devendra Jhajharia and the Bronze medal was won by Rajinder Singh in powerlifting event. In the last edition of Paralympics held in London in 2012, India had won just a silver medal.