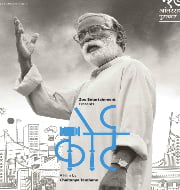 Critically acclaimed Marathi film ‘Court’ has been selected as India’s official entry to the Best Foreign Language category of the 88th Academy Awards 2016 (popularly known as Oscars).
The film was shortlisted from 30 other films by a Film Federation of India (FFI) jury headed by film-maker and director Amol Palekar.
It should be noted that Court is third Marathi film to be shortlisted for India’s official entry to Oscars. Other two films are Shwaas (2004) and Harishchandrachi Factory (2008).