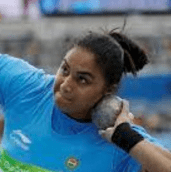 Shot putter Manpreet Kaur broke her own 2015 national record at the Asian Grand Prix in Jinhua, China. Her performance in the event has helped her to earn a gold medal and qualify for the World Championships to be held in London in August 2017.  Her outstanding performance in the first leg of the Asian Grand Prix has helped her to reach No 1 spot in the world rankings. Manpreet kaur’s performance at the event was overwhelming. Her throw is adjudged as the best by any shotputter this year. In addition, her throw was 32 centimeters more than the Rio Olympic gold medallist Michelle Carter. Kaur had become the first Indian woman to qualify for the shot put event at the Rio Olympics. But she managed to finish only 23rd in Rio.
Overall, India managed to bag seven medals including one gold, four silver and two bronze at the event. Two silver medals were secured by Tintu Lukka and Jinson Johnson. Shot putter Om Prakash managed to claim bronze with a distance of 18.41m. India’s world junior champion in javelin, Neeraj Chopra managed to win silver. Long jumper Neena Varakil has claimed silver and the national record holder in 100m sprint, Dutee Chand bagged bronze for the team.