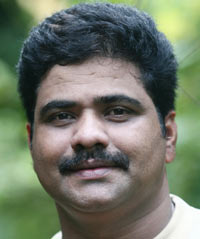 Malayalam filmmaker Madhu Kaithapram passed away in Kozhikode, Kerala. He was 44.
He had worked primarily in the Malayalam film industry based in Kerala. He made his directorial debut with the feature film Ekantham in 2006. For this film he had won National Film Award for the best debutant director and Kerala state film special jury award.
His critically acclaimed films includes ‘Madhya Venal’ in 2009. For this film he has won the young director the Kerala Film Criticis Association Award for the movie with social relevance and commitment.
His two other directorial ventures were ‘Orma Mathram’ (2011) and ‘Velli Vellichathil’ (2014).