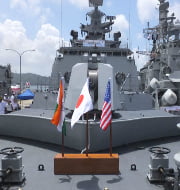 The Malabar Exercise 2019, the trilateral maritime exercise between navies of India, Japan and the US began off the coast of Japan. The year 2019 is the 23rd edition of Malabar Exercise.

The US Navy: It is being represented by USS McCampbell (DDG-85), a Los Angeles-Class Attack Submarine, and a ‘P8A‘ Long Range Maritime Patrol Aircraft.

Thus the participation of Indian naval ships and aircraft in the trilateral exercise would significantly bolster strong maritime bonds of friendship between three participant countries and at the same time it would contribute towards security and stability in region.

Japan’s Order of the Rising Sun honour to Bengaluru Teacher

The Japanese Government recently awarded the “Order of Rising Sun” to a Bengaluru based Japanese...