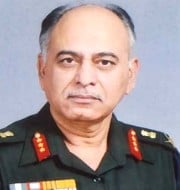 Lt Gen Man Mohan Singh Rai has been appointed as new Vice-Chief of the Indian Army.
He is presently the Eastern Army Commander and will succeed Lt Gen Philip Campose who superannuates on 31 July 2015.
Rai is from the Indian Army’s Corps of Engineers. It should be noted that Army General Dalbir Singh Suhag too was the Eastern Army Commander before taking over the top post.
He is an alumnus of National Defence Academy (NDA), Khadakwasla, Pune and was commissioned from the Indian Military Academy (IMA), Dehradun in 1976.
Lt General Praveen Bakshi who is currently serving as Chief of Staff, Northern Command will be elevated as Army commander and move to Eastern Command to succeed Lt Gen Man Mohan Singh Rai.