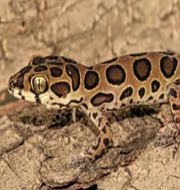 A new species of a ground-dwelling lizard has been discovered in Goregaon’s Aarey Colony and Thane’s Badlapur forested belts in Maharashtra.
It has been named as Cyrtodactylus Varadgirii or Giri’s Geckoella after a Bengaluru-based scientist Varad Giri. It was discovered 130 years after the last such gecko was discovered.
Key Facts