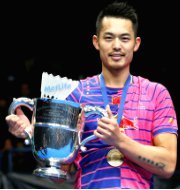 Lin Dan from China has won the prestigious 2016 All England Badminton title in the men’s singles category.
In the final match played at Birmingham, England he defeated Chinese teammate Tian Houwei by 21-9, 21-10 score.
It was his overall sixth All England badminton title and earlier he had won it in 2004, 2006, 2007, 2009, 2012.
Other category winners

About All England Open Badminton Championships