US lifts embargo on sales of lethal weapons to Vietnam 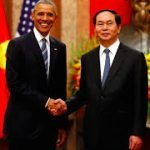 United States has fully lifted its embargo on sales of lethal weapons to Vietnam, its one-time enemy. This move of US removed a lingering vestige of the Cold War that was seen in South East Asia in 1970’s.
It was announced by US President Barack Obama during his official state visit to Vietnam and after talks with Vietnamese President Tran Dai Quang.
He is the third US President to visit Vietnam since the end of the Vietnam War in 1975. Other two Presidents were Bill Clinton (visited in 2000) and George W. Bush (2006).
US Arms embargo on Vietnam has been in place since 1984 over the human rights issue. In recent times Vietnam had been arguing for an end to this embargo, which was partially lifted in 2014.
Comment
Experts believe that US is trying to bolster its relationship with its Pacific allies, as China asserts territorial claims in the disputed South China Sea. Vietnam is one of several South east Asian countries in the region involved in maritime disputes with China.