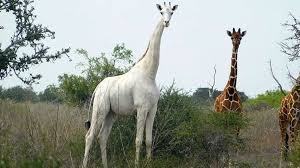 In order to keep poachers at bay, the world’s only known White Giraffe was fitted with GPS tracking device in north east Kenya. The Giraffe is white in colour due to a rare genetic condition called Leucism. Leucism is loss of pigmentation. The tracking device will provide hourly update about the whereabouts of the Giraffe. This will help to keep the animal safe from poachers. The White Giraffe was first spotted in 2016. The mother and calf had died.

According to the Africa Wildlife Foundation, around 40% of Giraffe population has disappeared in the last thirty years. The IUCN (International Union for Conservation of Nature) has listed Giraffe under ‘Vulnerable’ category. According to IUCN, currently, there are 68,293 Giraffe in the world. Giraffe are already extinct in seven African countries. They are Eritrea, Burkina Faso, Guinea, Mauritania, Mali, Senegal and Nigeria.

India has around 30 Giraffes in eleven zoos. Apart from Zoos, there are no Giraffes in the forests of India.

There are three different species of Giraffe in Kenya. They are Masai Giraffe, Rothschilds Giraffe and Reticulated Giraffe. Kenya is the only country in the world that is actively taking initiatives to conserve Giraffe in its forests.

The World Giraffe Day is celebrated on June 21. It was initiated by the Giraffe Conservation Foundation.

There are only four species of Giraffe in the world. They are

It is the only conservation organization that provides innovative approaches to save Giraffe in the world.

Giraffes live in Savannas of Africa. They thrive in areas that are very hot. Giraffes grow to a height of 5 to 6 metres.