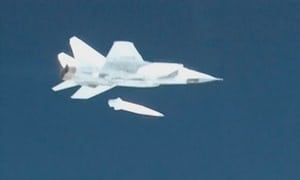 Russia successfully launched high-precision aeroballistic Kinzhal hypersonic missile from a MiG-31 supersonic interceptor jet. During the test, the missile launch was normal and it hit preset target on the test site. It also met its performance characteristics and time indicators.

The Kinzhal missile is one of array of new weapons developed by Russia. Kinzhal, the name means double-edged Russian dagger. It can fly 10 times the speed of sound and has range of 2,000km. It is equipped with high-precision aeroballistic missiles supporting air strikes without entering enemy’s air defence zone. It can overcome air-defence systems.
The missile system has no counterparts across globe owing to high flight performance characteristic of MiG-31 fighter jet and hypersonic missile with small radar signature and high maneuverability. The first air unit equipped with Kinzhal system was deployed in Russia’s Southern Military District in December 2017.

PM Modi to attend G7 Summit [All about G7]